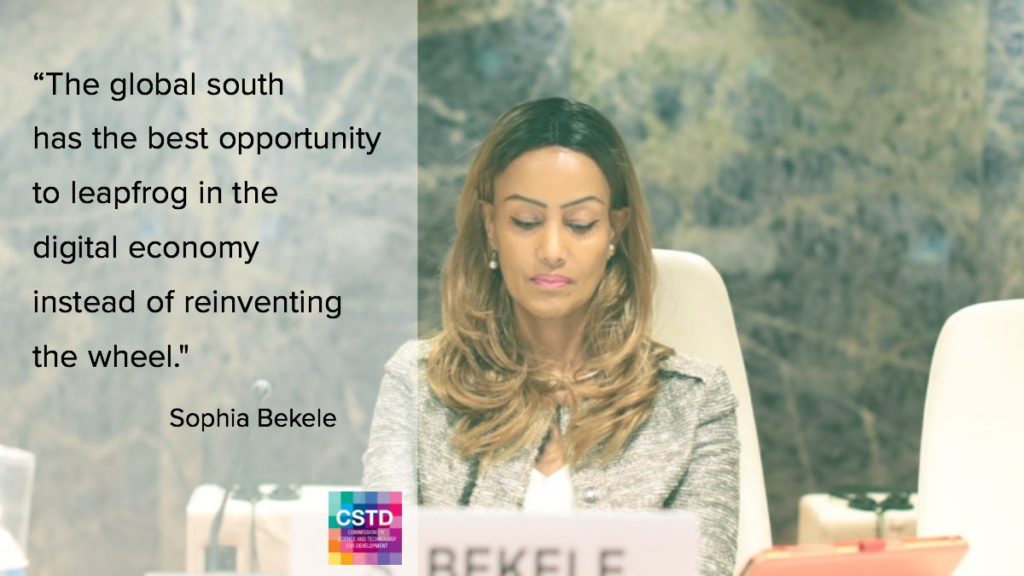 Labour markets and educational needs are being transformed for women and young people by the onslaught of fast-moving technological change, a United Nations commission hears

Negative stereotypes about women and girls studying science, technology, engineering and mathematics (STEM) subjects are among the impediments to an inclusive world where hi-tech solutions solve global problems, the 21st session of the UN Commission on Science and Technology for Development (CSTD), hosted by UNCTAD, heard at a meeting in Geneva on 15 May.

Exploring the role of developing #digitalskills in achieving the #GlobalGoals @sophiabekele at the 21st Commission on Science and Technology for Development #UNCSTD pic.twitter.com/FVjHseKZOe

An all-woman panel discussed the theme of building digital competencies to benefit from existing and emerging technologies, with a special focus on gender and youth dimensions.

Recalling that women had played pivotal roles in the history of computing, Shirley Malcom, head of the directorate of education and human resources at the American Association for the Advancement of Science, said it was “refreshing” to see the CSTD focus on issues of gender and youth in its deliberations.

Profound changes for all

Speaking in a video message, the meeting also heard from Geraldine Byrne Nason, chair of the United Nations Commission on the Status of Women, on the importance of coordination between intergovernmental bodies.

To help guide the conversation, UNCTAD prepared a background report, steered by Shamika N. Sirimanne, director of UNCTAD’s, division on technology and logistics, and head of the CSTD Secretariat.

Setting out the issues

The remarkable technological progress the world has seen recently is transforming the fabric of our lives. The profound changes – driven by the spread of new information and communications technologies (ICTs) – will affect everyone’s life and every country’s economy.

For example, sensor devices deployed all over the world are improving agricultural productivity and making it possible to map and control epidemic outbreaks. And digital platforms are creating new job opportunities.

But Big Data can unfortunately also be used to influence democratic processes – as the world witnessed in recent elections in the United States and Europe – and automation means that certain jobs will no longer be available for humans.

Whether the effects of technological change will be more positive than negative depends on the getting the right skills into the right people’s hands.

Miriam Nicado García, rector of Cuba’s University of Informatics Sciences (UCI), explained how her university was a new venture, begun in 2002, that aimed to tackle this problem for her country. Software produced in Cuba for health, education, legal and tourism applications was being made available free to other countries, she said.

Estimates show that already by 2020 90% of new jobs will require ICT skills. Yet more than one-third of workers in developed countries that are members of the Organisation for Economic Co-operation and Development (OECD) currently lack the digital know-how needed. And over half the population in these economies have no digital skills at all – with female employees usually being less tech savvy than their male counterparts.

“The more we let the gender divide grow, the more economic disparities will grow,” Ms. Dalli said when explaining the proactive measures Malta had taken, as a small island nation with few resources, to promote women in STEM fields.

In fact, technology in the workplace can affect women and men differently. ICT service jobs are normally well paid, but the share of women in such positions remains very low, especially in developing countries.

A recent survey among 13 major developed and emerging economies showed that female workers tend to hold low-growth or declining occupations, such as sales and administrative jobs.

Although women are less represented in sectors threatened by automation, such as manufacturing and construction, the report prepared by UNCTAD ahead of the event says that since there are few women in STEM job families, they may not be well placed in the economy to benefit from the increasing demand for workers with tech skills.

Such a mismatch between what businesses need and what job-seekers offer will slow economic growth significantly. What’s worse, portions of the population could become unemployable. And with unemployment levels already high in many parts of the world, such a situation would be devastating, not just for the individuals but also for their families and communities.

Getting the right skills in the hands of the workforce will be even more important in developing countries, where billions of young people will enter the job market in the coming decades.

In Africa alone, about 11 million young people will enter the labour market every year for the next decade. If governments don’t help equip new job seekers with the right skills, they may have to deal with rising youth unemployment.

However, according to Sophia Bekele, founder & CEO of DotConnectAfrica Group, whose works helps African women run tech start-ups, developing countries may have a competitive advantage over older, more developed markets.

“The global South has best opportunity to leapfrog in the digital economy instead of reinventing the wheel,” she said.

According to the UNCTAD report, four different levels of digital skills are needed during the journey from adopting new devices to creating new technologies.

“The most fundamental skill sets for individuals and companies in the digital era are capabilities to adopt new technologies,” the report says, adding that “digital literacy for all is a basic requirement for every citizen to participate fully in the digital society.”

So every country, no matter the stage of economic development, needs to have in place basic digital education and training programmes for all its citizens.

For people, being “digital literate” means being able to use the basic functions of common devices, such as a computer. For a business, it means “knowledge about ICT installations in the existing business system,” the report says.

But more and more professions, even beyond the ICT sector, require the ability to adapt and creatively use available technologies. And it is when a countries workforce can modify existing technology or design new systems and devices technologies that real value is added to the economy.

“To maximize the benefits of new technology, countries and companies in developing countries need to have the digital skills to introduce modifications to new technologies,” the report says. This is because advanced technologies are often designed for contexts – both technical and social – that differ from the realities of many developing economies, and therefore must be adapted to the local context, the report adds.

Adding a gender dimension to the issue of context, Ms. Malcom said that very often, time itself was a scarce commodity for women that policies designed to help them must reflect.

Technology’s impact, however, extends well beyond the labour market, and being tech savvy has increasingly become important for enjoying a good quality of life in what has become and increasing digital world.

“With increasing numbers of software and applications being used to accomplish everyday communicational and informational tasks, basic knowledge of ICTs is now essential for citizens to solve everyday problems, as well as to engage in community activities,” the report says.

Digital skills are a multifaceted moving target. According to the report, six major drivers influence what technical competencies people need:

But the other, more specific digital competencies required will likely depend on the country’s economic specialization and industrial development.

For example, the report says, “Countries where the manufacturing sector dominates economic growth will require talents, experts and a workforce with specialized skills in industrial robotics, automation and the Internet of Things.”

While the skills that workers need to use technology increases, so does the list of the complementary soft skills necessary to perform in the digital economy.

Human skills in a robot’s world

But digital skills are not enough to adapt to changing labour markets demands. Paradoxically, as work becomes more automated, the unique human skills that cannot be easily replaced by machines become ever more important.

So building and strengthening skills such as complex problem solving, critical thinking, and creativity, will be essential to create the flexibility required for the current and future demands for the workplace, the report says.

The need for human creativity and innovation helps explain why professions like engineering and science are less at threatened by digitalization and computerization, the report says. Likewise, occupations that involve sophisticated communication skills will also be in a better position in the digital era.

Finally, even if computers and robots could perform every task, economies would still rely on people to come up with the new businesses ideas. That’s why the report calls on governments to equip people with the digital entrepreneurship skills.