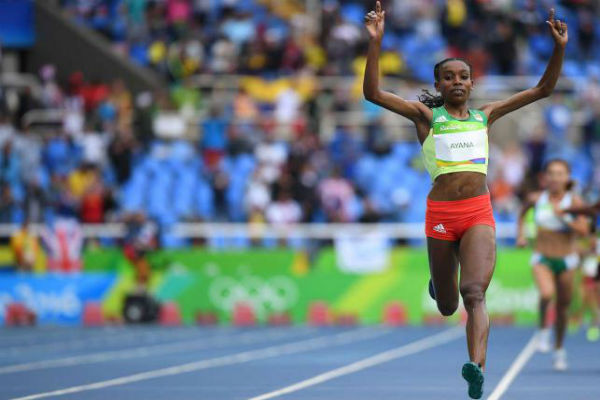 Foreword from the CEO, MS. Sophia Bekele
The article was first published on August 28, 2016  on “The Hill”, the Congress Forum for Lawmakers and is reproduced with permission.Exclusive Commentary for The Hill: Would internet transition have an impact on current US election?

As most are toggling between the ongoing Rio World Olympics 2016 and US election, we call upon women who continue to excel in what they do best and land a spot in history, such as Simone Biles, the first American women gymnast to win four gold medals in a SINGLE Olympics or the Ethiopian Almaz Ayana to win the women’s 10,000 meters setting a new World and Olympic record, as well as Africa’s first Gold Medal. Amazing!

Despite our individual politics however, it would certainly be partial, if I don’t acknowledge as well as congratulate US Secretary of State Hillary Clinton’s precedence setting nomination by one of a major national political parties in one of world’s most powerful Democracies.

Mrs. Clinton was in public service for most of her career and it is through being a senator, Secretary of State and then a presidential nominee, and with no short cuts I might add like her male counterparts.  She is quite a leader, breaking barriers for others including men that were her colleagues or otherwise, and finally broke the marble glass ceiling in US political area for the highest office at the White House; a candidate for the Presidency of the US.  It even begs the question as to why the US never had such a choice in the past!   Mrs. Clinton serves as an example and role model for many women around the world that have faced great challenges.

Politics and religion is personal people have said for long and I agree.   What I do not agree is when public policy positions are manipulated to serve the few.  I am a policy person and my work can attest for itself.  I have fought for many policies over corporate governance in private organizations in the US and policies to bridging the gap in technology for Africa as well as on behalf of the global International Community at the Global Internet Governing body, the Internet Corporation for Assigned Names and Numbers (ICANN). Currently, I find myself in the midst of the politics of internet between ICANN and US Congress.  I have campaigned and continued to campaign that the US congress not to allow the ICANN to be privatized to the interest of the very few.  In fact, I am the first person on record to have marched to US Congress office back in February 2013 and raised the issue of ICANN’s accountability by demonstrating the example of how ICANN has mishandled our .africa gTLD application in its own house, and they are not ready to govern themselves.   After winning in Independent Accountability Process (IRP) in 2013 against ICANN, we are now forced to  file a lawsuit at the US Court in Los Angeles California against ICANN, for what I believe has been a sham process and we have won various injunctions.

US Congressional Parties split over Internet Governance
Ever since then, myself and my organization as a deeply affected party have actively been engaged with Congress and I have expressed my views in various public commentaries toward the illegitimacy of this transition moving forward without congressional approval.  I have advocated that there is “No Legal Basis for IANA Transition“. My recent letter to Sens. Marco Rubio (R-Fla.) and Ted Cruz (R-Texas) certainly has  helped in identifying the majority of the key issues that  the Congress is now forming its opinion on and it has vindicated me. We now see an activated campaign against this transition by various senators supporting it, highlighting the same issues.  A legislation process is in progress to block this transition as part of the Republican policy. Mrs. Hillary Clinton on the other hand as a representative of the Democratic party has advanced the voice of the current Obama administration by announcing her support towards the transition, should she be elected to office. Now, such predicament in policy split affect everyone’s choices at times.   Even before such open statements were made by the respective parties, I rightfully predicted in my public commentary to The Hill, re: “November 2016 Elections will determine fate of Internet Privatization; Fixing what is not broken” and rightfully so, we will be waiting for this outcome.

Now the race is officially on and we will be watching which one US voters prefer!  But given the Secretary of State makes it to the office of the presidency, I still have hope that she will listen and work with the other side of the aisle, and reevaluate her current position on Internet transition from US oversight.

Link to the original article: http://thehill.com/blogs/congress-blog/technology/293518-would-internet-transition-have-an-impact-on-current-us